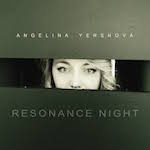 Utilising piano and electronics isn’t anything new; but it does take a degree of talent to actually produce anything of worth.  Luckily, Yershova has it in abundance.

Pulling notes into textured drones, she evolves and draws them through beats, providing a relative discord; and more often than not, an off-key web of mystery.  This then, in turn emphasises the natural harmonies when they do arise.

This won’t be for everyone, such is the haphazard nature of the album, which utilises Jazz structures at its core; but produces something far different as the end result.  There is a strength in creating something that manages to grab emotion from the claws of nonsense; and Angelina plays with the two in equal measure.

Sonically torrid in spaces, ‘Resonance Night’ is an accomplished production that is as uncomfortable as it is welcoming.  Hard to pin down to any one genre, whilst this won’t be on constant rotation, there is no denying the talent on display; such is its urgency.