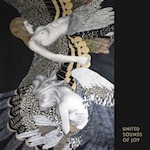 When I see a press sheet and it quotes people such as a BBC Radio 6 presenter, it makes me recoil in horror.  It’s rare that anyone from the mainstream media has given me any indication that they have a real sense of musical taste or appreciation, apart from what they’re told to report on; so this was hardly a selling point.

However, musically speaking, USOJ are spot on, with opener ‘Seams of Sorrow’ providing a cascading wall of ambient pads that interweave over each other seamlessly.  The vocals feel a little too 70’s hippy chic for my tastes; but nevertheless, are rich in tone and performed well.

There is a Western sensibility to the guitar work throughout and this provides an odd mix on tracks such as ‘The Sun that Hides a Darker Star’, with its oozing lounge lizard approach; but comes to life when if offsets against the Hammond Organ of ‘Dust Veil’.

USOJ shine on ‘She Sets the Stars in Motion’, which inadvertently strikes a chord vocally and is reminiscent of May Day folk nostalgia, even if the music itself is anything but.  Given that this duo resides in a more commercial environment, there was as much for me to enjoy on here, as there was to loathe.  Personally speaking I have never been a fan of anything remotely flower power and whilst these guys don’t scream it from the rooftops, you can feel it in the veins of their musicality; and it’s this that turns me off them, although I won’t deny them their song writing capabilities.