Back from his relatively short-lived retirement and venture into new waters with his ‘A Wake a Week’ project, Dave Dando Moore gives us ‘Everyday Explanations’.

‘Scattered’ opens up the proceedings, which is a suitably downbeat piano and guitar led affair that coinciding with track two ‘Reality Steps’ collectively give the impression of a rainy day that that slowly lets the sun filter through when again the barrage of distorted guitars collide to end those uplifting moments to let the truth of certain situations through.

A lot of albums I listen to when out and about fit well when I am traveling by train such is the appropriate pace, indeed previous Detritus albums ticked that box; however with this latest album it is a release that matches walking speeds, headphones in, shut off from the world and trundling round a bleak town with clouds overshadowing the pavement while drizzle hits you gently in the face.  ‘Everyday Explanations’ has its time and place and to be honest I have all the time in the world for it, as a lot of my days are spent in that situation in the north of England as it’s safe to say that on this latest release nothing is too upbeat.

Moody; yes, a word that isn’t often used, but this simply and perfectly explains the overall sound of this CD; nothing too overstated, but trundling along in your raincoat like a bear with a sore head and woe betide anyone interrupt you, with the only calm released in ambient form from ‘It’s Nice to See the Sky’, which is quietly haunting.  It’s also nice to see that for once the artwork does thematically suit the release;  masquerading artist Chevreux has a habit of spoiling albums with incompetent concepts or spelling mistakes, but not this time around thankfully.

Overall this is an excellent piece of work from start to finished and best consumed as a whole package in one sitting (or most likely, walking).  I had thought we had seen the end of this project some time ago and I am thoroughly happy Dave has resurfaced from his self imposed exile, dusted off the cobwebs, reworked and rethought the approach of Detritus and given us one of the better releases of 2011. 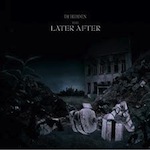 The alter ego of Dutch maestro Noël Wessels, DJ Hidden has been spinning the boards for some time now before this debut full length CD.  Like the soundtrack to urban decay, with nightmarish consequences, DJ Hidden has that nack of letting all of his subtleties do the work for him.

Systematically gentle in his approach with his background work, with subtle drones, pads and sub bass frequencies, he proceeds to punish the listener with multi-layered drums, executed with machine gun precision.

It’s this ‘timed to perfection’ approach that simply makes this one of the best albums I have heard in a very long time.  There could be an argument that sometimes things needn’t follow what you expect, and that a few surprises wouldn’t go a miss.  Not so with ‘The Later After’.  Everything you want and expect is driven in with such technical proficiency that it leaves no space for argument, no stone unturned.  It punishes, enthralls and leaves you hungry for more.

Harsh and gentle where it needs to be, TLA has every element you expect in an album, and a little more to boot.  Blows away the better works of ‘Panacea’ for me, and just misses out on top marks, because I abhor the idea of secret tracks.  Still… that’s pretty good as well.