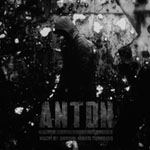 There are literally tons of underground short films out there and obviously, an underground soundtrack accompanies most of them.  ‘Anton’ is a Science Fiction thriller released by Visual Cooks and the brothers Tjernberg, who have done a number of soundtracks over the years, have produced a classically bombastic, accompanying CD.

Pounding tympani sections open up the proceedings with ‘The Hunt’; setting the pace before the obscure ambience of ‘Atmospheric Toxicity’ and Jazz laden ‘Postapocalyptic Landscape’ remind you that this is actually a soundtrack, with their complete lack of cohesion played back to back.

OST’s are by their nature, usually hard to swallow as a whole.  Remembering that the songs you are listening to were penned to slot into a movie, assists in digesting the majority of releases out there created for this purpose.  ‘Anton (ost)’ though, does manage to hold weight by making sure each track is a song in its own right; and whist nothing truly works side by side in one sitting, there is the added benefit that Daniel and Michael know how to create actual music, where the individual tracks by themselves are quite strong.