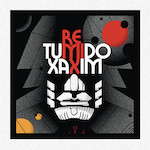 ‘Xaxim’ is one of the tracks from Tumido’s previous album ‘Nomads’ from 2014; and I haven’t heard it.  This LP is effectively four remixes of that track; so I had to hunt that down to give it a listen in its original format. Happy enough with the electronic-come rhythmical Industrial/tribal affair on offer I was ready to give this a listen.

Nik Hummer gives his best stab at altering the track into a dramatically different affair that has dub elements flowing throughout.  Stefan Nemeth brings the atmosphere, slowing the song right down to its grinding core; and Buenoventura bring 80’s dance sensibility into play.  Tumido also provide an alternate version stripped of rhythm and along with their cohorts on this release, have produced better versions than the original.

Overall this is fairly decent; and the re-mixers have provided a good representation of their own individual styles.  This however, is just one for those already acquainted with Tumido; and should only be purchased if you have grabbed a copy of their previous output (and therefore limited in its appeal). 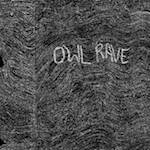 As far as debut albums go, this initially seemed fairly promising.  Heavily influenced by the “Duality of a seemingly perfect world and deep abysses”, Owl Rave unashamedly quote that they use David Lynch’s Twin Peaks as their main reference point; and it shows, sort of.

Dark, melancholic strums of guitar permeate the entirety of the release as a noir backdrop in tone to the simplistic percussion.  However, this is all but destroyed come the ridiculous male vocals, such as on track two, ‘Searching’, where it feels amateurish and misplaced.

I almost forgave them for this error in judgement the moment the guitar noise of ‘A Knife For Every Heart’ kicked in; right up until the pathetic Death Metal vocals entered the frame and turned into the comedy horror, morbid tones of the title track, being spoken in doom laden fashion.  If anything else I have to give them a pat on the back for inducing the uncontrollable laughter in me that followed.

Not to be completely horrible, there are moments on this album that are well thought out; the ambient noise of ‘Fright Car’, begs for an album to back it up.  Key pieces of instrumentation scattered throughout, work well in a dark lounge kind of way; but are ultimately let down by a vocalist who should just learn to shut his trap.