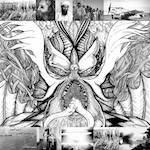 A real peculiarity here, with a spoken word release alongside sound, reminding me somewhat of the works of It-Clings; minus the forced humour, it is an overall more serious affair.

The ‘music’ side of ‘The Battle for Tomorrow’ is simplified more often than not to drones and other sounds, such as air raid sirens and grinds and whirs that are encountered on many a PE structured album.  If anything, as on ‘I am War’; this portrays a riotous anarchism to the ambience of the album as a whole, working to great effect.

As a whole though, you have to treat this release differently to any conventional album.  Relying on poetry as its driving force requires a listener that is completely embedded into ethos of making a piece of work such as this; and I can only entertain this sort of field in small bursts.  In all honesty I found 11 tracks somewhat overbearing, desperately clinging on at least for some traditional screaming vocals, leaning more to the side of Power Electronics; where I feel this would have worked better.

Kudos has to be given to Probert for at least sticking to his guns with the daring it takes to produce an album such as this; and even swelling with overt pretentiousness, I am fairly sure there is a market for his work.