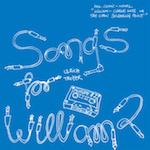 I love the effort that has gone into this release.  Not only has Troyer recorded a full album, he has included a 32 page comic to accompany it illustrated by the man himself, titled “Cable Loss, or The Open Soldering Point”.  Following the trials of a plucky effects pedal on its journey on tour with a band, it’s a remarkably enjoyable read and adds just that little extra to the overall experience.

Of course, when this amount of effort has gone into the physical product, the music has to match up so it’s not seen as overcompensation for lack of musical talent; luckily, Troyer has this in abundance as well.

‘Shake Your Knobs’ is a curious, mellow opener that folds mild electronica with harmonica and sub-bass lines into an engaging flow that has an almost reggae feel as it’s end result; given that I don’t generally appreciate that genre, I found myself enjoying the outcome immensely.

There is an overt dub feel to a lot of Ulrich’s work that is consummately professional enough not to head into territory that is too commercial and ‘Stone Age Circuits’ along with ‘Summer Reverb’, add flutters of enough feedback and obscurity to give a necessary alternative edge.

Over the course of the album Troyer brilliantly infuse elements of electronica that hit from many a different angle.  The main weapon in his arsenal being subtlety; a whole range of influences filter through, with enough to please the casual IDM fan to boot.

This latest release may not be for everyone; certainly those that like their music a little harder will most likely lose patience with this release.  For me though, I can only marvel at the pleasantly persistent wave upon wave of intricacies that are the perfect backdrop to the accompanying comic book (which is a stroke of genius).

Essentially the sound produced here by Vienna based Troyer has been created specifically to be choreographed for dance performance by Blaschke and with this as a foundation, the possibilities seem fairly endless.

Bearing this in mind, it would be fair to say that the audio on offer, unsurprisingly didn’t formulate as an entire song until track three, ‘Somatic Script’, with resonating drones and guitar like formulations rippling through the speakers.

Momentary spaces where ambience is allowed to filter through the mix (albeit quietly), such as on ‘In the Case of Loss’, coupled with the only dance output on this release with the broken glitch pop of ‘Song For Heide’ and the light dub-isms of ‘Back From Serbia’ are the saving grace of this album from a pure listening perspective.

The danger in creating releases such as this is that whilst they’re composed for performance, there are no accompanying visuals to carry the translation across and desperation ensues as patience is tested at key points of listening.  However, there is little to deny that there is more to this album than the sum of its parts and if this had been released with a video representation of what Troyer and Blaschke were trying to convey, there would be much more to discuss.