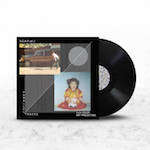 This is a release determined more by the label than the artist, so it would appear. Their intention is to publish a series of vinyl releases, with a ludicrously limited amount of 30 copies per release. Therefore these are obviously lathe cuts (no shame in that though).

What transpires on this, the first in the series; is an array of experimental sounds that Sun Color has crafted into two seamless songs. Occasionally it teeters into actual music territory; but more often than not, relies on field recordings.

For the most part ‘Parallel Tracks’ is engaging enough. It does waver occasionally with pointless foreign conversation and other interruptions; but does have its fair share of ambient atmospherics, so all is not lost.

This would benefit the collector in you, more than say actual music fans. I sit on the fence with this; as some of it is absolutely pointless. The format alone and the odd jaunt into musicality saves it somewhat; and this is in all honesty, an oddity that doesn’t offend me surprisingly.