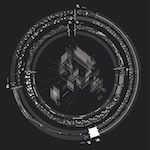 Originally based in Leeds UK, Goff now residing in Berlin has spent the last few years in collaboration with many a producer, such as the talented Aiden Baker, amongst others.

‘Hue’ is an exploration of musical space between minimalistic noises, drones and somewhere in-between.   The soundtrack elements of ‘Yellow’ and the violin of ‘Orange’ appear as odd bedfellows to the remainder of the album, yet somehow fit in with the droning ambience of ‘Violet’ and ‘Blue’.   However, these seem to be a world way from the plucking peculiarity of (the rather annoying) ‘Red’; and the field recording nonsense of ‘Green’.

Goff, for me, has two halves to his musical persona.  The wealth of talent to create actual music, battling with his desire to produce something for an art installation; and the latter rarely works on record.  ‘Hue’ is a direct representation of this Jekyll and Hyde nature; and installation work placed onto a medium to listen to at home, is something I abhor for the most part.  It only works in the environment it was chosen for.

Regarding the actual music aspect of his work, there is a lot to enjoy; and for me this would have been better placed as an EP, kept firmly away from its two drab minimalistic cousins, that are better suited to art foundation classes in those hazy days of college youth.