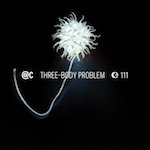 ‘Three Body Problem’ is the 16th album from this duo; and their longevity has to be commended, considering the obscurity of their releases.

Like their previous release ‘Ab Ovo’, this latest output started as music formulated for a puppet theatre play ‘Agapornis’. This however, was recomposed after the event and is now its own soundtrack.

Minimalistic but understated, this latest piece of work is a sea of crackles and hisses dancing across a foundation of atmospheric ambient textures and bass lines. Overall, the sparse nature of the album steers distinctly away from being actual music, regardless of the interplay with actual instrumentation.

As far as sound experimentation goes though, @C will appeal to artistic types who revel in juxtapositions of noise that would sit well within an installation, or indeed within a live environment with corresponding visualisation. As such, this is an album that will not appeal to everyone; but does its job well, as far as contemplative aural exploration goes.

The lounge electronica of ‘Category: Murder Entertainers’ sets the scene for the rest of the album. With stop/start loops and a nostalgic veil over the sound as a whole, Slavin creates a thick atmosphere that resonates as an image of over saturated film, overplayed until it burns away from the reel.

There is an underlying Jazz influence throughout, that battles constantly with the electronic format with which this album is created. The warring factions make for an interesting and surprisingly complementary voyage of experimentation; that keeps the listener on their toes.

With ‘Bittersweet Melodies’, Ran has created an album that should appeal to small cross sections of many a genre lover; appealing to those who are willing to accept traditional music sources as scattered and broken storytelling arcs, with a hint of shoe gazer appeal to boot.

The field of electroacoustic music has its fair share of garbage, as it does those that are truly inspirational; Andreas Trobollowitsch sits pointing towards the former, just left of the middle ground.

Processing acoustic instrumentation with electronics is an art in itself, if the producer is to create anything of actual value; and when Andreas goes full flow it works well. However, he does fall into the trap of using space to its detriment; and on more than a few occasions there is barely an audible sound, apart from the odd pluck and flutter of glitch and squeaks. Then when things do kick off it can be an irritating mess.

Once again, here we have an artist that doesn’t work well on this format (if this release is anything to go by). It’s often I encounter an album that would work better as an installation and ‘Roha’ is no exception.

‘Against Nature’, comprises of five tracks with the same title (that of the album). Coupled with a press release that provides more in a literary context than its audio companion could ever, can make your mind boggle as to just what medication people are on (or should be).

Regardless of the reference to the decadent work by Huysmans; ‘Against Nature’, for the most part, is nothing more than a collection of electronic noises, field recordings and frustrating pitches. Whetham does display an ear for ambient; and when he does, it’s a successful intervention. However, these excursions are too few and far between to appease the irritation of having your eardrums audibly scraped out along the way.

There is a whole market out there for people who produce audio in such a fashion; indeed the Portuguese label this resides on is a large exponent of it. More power to those that actively support and appreciate sound sculptors such as this; but I find it a touch too self-indulgent and irritating.

This 20 minute one-track EP is available only on Digital Download (unfortunately for the collectors out there); with Adkins thematically covering the notion of ‘drift’ and a lone figure wandering round a city, locked in their own world.

‘Residual Forms’ is a beautiful release; with captivating drones and harmonies that slide and weave gently together into a rich tapestry of glowing light. Gentle smatterings of understated piano lay as the bridge for low basses to fall from; and light pads to float upwards to the sky.

It’s easy to become sucked into Monty’s story. If there ever was a lesson on how to hypnotise a listener with music, then Adkins accomplished ambient will engross those with a penchant for the genre with consummate ease.

Adkins does have his own sense of originality, but the tell-tale swells of low distorted guitar that rush the listener midway, are reminiscent of Fennesz; and that is no insult at all, completely the opposite in fact.

As a lover and avid fan of most music of this ilk, all I can say to Crónica is “vinyl please”.

This expansive 2 track LP was recorded live in the Norwegian Seamen’s Church in Rotterdam January 2012 and has just seen light of day now. As the fifth solo release from Rishaug, he concentrates his efforts on the mechanics of a dusty old church organ, an old tube amp and electric guitar.

Utilising the natural harmonics and acoustics of the building, bodes well for a project such as this. The creaks and groans of the old church play as much a part as the instrumentation, in building an atmosphere that derives its influence from Dark Ambient and shuddering Drone.

Side B differs from its opening counterpart. Where Side A concentrates its efforts on natural acoustics, ‘Pa.Git’ relies on the tube amps shudders and grinds as the guitar resonates through the mix.

The music itself is heavily processed without doubt; although recomposed and restructured in the studio at a later date, the natural ambience and feel that Rishaug obviously tried to achieve is not lost on the listener.

Overall, this is an solid release that benefits from both sides of the vinyl representing two sides of a coin that approach Alexander’s audience from two differing perspectives; although just whether I will play it again after one listen, is an altogether different question.

Not to be confused with the French Industrial act, ‘AB-OVO’ is the title of @C’s work for ‘OVO’, which is a puppet theatre from Porto.  I can only imagine just how obscure a performance this would be with this release as its soundtrack.

Utilising an effective wave of dark ambience, ‘98’ sets the scene with cuts up razor wire electronics that scythe through the bubbling mass; it may be a tad repetitive over the course of over 7 minutes, but it is effective.

In stark contrast, the altogether more electronic, glitch ridden ‘99’, only just holds itself together, just shy of falling apart at the seams; leaving ‘100’ to chill everything out with scattered harmonics.

The next tracks, ‘101’, ‘102’ and yeah you guessed it, ‘103’ follow much the same path as their predecessors, with varying momentary glitches and stabs of electronics, brushing harmonies and subtle ambience.  Nothing stands out as utterly amazing, but this is a conceptual album that has a function; as a consequence, there isn’t much on here for the masses, but is by and large pleasantly inoffensive.

Strangely ironic that this latest album by Pure is titled ‘No End of Vinyl’, yet is released on Compact Disc; however, I do love the embossed triple-folded slipcase that feels like the well-loved grooves of an actual record, which is a nice touch.

As the album states, this is a collection of collaborative works, where Pure has entertained input from various other artists such as Cindytalk, JSX and Goner, to name a few.  Some 14 years after ‘The.End.Of.Vinyl.’ released by the mighty Mego label, Pure is paying homage to the label and its interpretation of what they felt the future held for us musically, with tracks that were to be conceived as a set of discs that would fix onto the wax itself.

Opening up with a resonating hum, bursts of sound steadily punch their way into prominence, folding into a wash of industrial machine crunches and noisy ambience.  Christian De Babylon remixes ‘The End of Vinyl’ next, with an altogether more electronically charged, almost analogue chopped up programming feast of stuttered beats, guttural IDM and airy pads.  Side by side the opposing forces of these first two tracks work well together and provide variation.

The thumping frenetic beat of JSX assists in providing a necessary tension, whilst Cindytalk follow with blistering, yet tempered noise; the former outshining the latter but once again giving the listener a more open installation to view aurally and epitomising what makes this album so listenable as a whole.

Broken up rave, torn apart Dark Ambient, staggered electronica and shattered noises blended in a pot of Industrial glue, ‘No End of Vinyl’ crosses genres whilst still remaining to paint a picture of sounds dripped in black tar.  Admittedly there will be parts of this release that won’t sit well with some people, but those who have a wider appreciation of the Industrial umbrella with be thoroughly satiated as the throbbing soundtrack of the collective input of Current 909 and Pure fades into the distance.

The packaging accompanying this release is nothing short of excellent. A six-inch (ish) box with photographic stills and pull-outs, reeking of quality before you even venture into playing the CD.  Julia Weinmann provides a mass of images as in collaboration to the musical perspectives created by Ephraim Wegner to be consumed as a whole ideal.

As glorious as this all looks however, Wegner has approached this album from the perspective of field recordings.  People who follow my reviews are most likely aware of my loathing for the genre as a whole, with masses of ridiculous self-indulgent twaddle being churned out on what appears to be a weekly basis, with little or no regard to talent.

Together, the natural clicks and static vibrations throughout this release do in some respect work as an artistic statement and the audio manipulations raise an impressionistic viewpoint on sounds contained within the imagery.  As an installation within a gallery this would most likely carry a lot of weight, but unfortunately in the comfort of your own home, it makes little to no sense at all.

I have to express my feelings of disappointment with ‘Eins Bis Sechzehn’; I truly wanted the accompanying audio to actually contain music I could actually listen to.  I know this isn’t the point and I am aware that an album like this is merely another canvas for the artists to express themselves with, but I have no time for thespian tomfoolery and this didn’t impress me one jot.

With a resume that includes ‘Port-Royal’ amongst its ranks, Alexandr Vatagin did set my expectations high before I even pressed play.  Fair to say, this release did have a lot to live up to way before the first slices of audio hit my ears.

Clocking in at just over 34 minutes, ‘Five Years…’ is one long track with interventions throughout providing collaborations with other artists that surprisingly is cohesive from start to finish.  Audio manipulations range from the organic to the electronic and provide a broader range of styles than is initially evident.

Overall, this album is a somewhat quiet affair.  Scattered levels of ambient and space force you to play this with the volume ramped up in an attempt to make you appreciate the minute nuances that gel the release as one.  It’s this bullishness however, that is ultimately the albums downfall.

What ‘…Cold Asphalt’ suffers from, are clear track markers to break up the tedium.  I despise being told how to listen to release in its entirety, when you have to suffer periods of lifeless drivel just to appreciate the finer points of the work on offer.  Depressingly, this album has more of the former than the latter.