I have never been a lover of Nick Grey’s musical output. I can’t help but see him as a Nick Cave wannabe, a self-absorbed musician who thinks he has more to say than he actually does. His latest album is “A collection of songs about unhealthy thinking’; and as a side note ‘do not play this record during or after yoga’. You have been warned.

Once again, Grey’s talents vocally are good and his random orchestra show they’re accomplished at what they do; and at least this time out he isn’t trying to emulate a mutant hybrid of Bowie and Cave. Instead tracks such as the title one are paced in the same vein as a competent Pink Floyd.

‘Of Ghosts and Women’ touches on Ultravox in some respects and as far as experimentalism gets; that’s it. I will credit Grey this time on expanding on more than one genre, and the desperation in his voice isn’t as grating as it once was; it’s merely tolerable in a Coldplay way.

All in all this isn’t a terrible album and I didn’t feel like snapping it in two like much of his previous work. 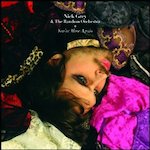 I can’t say I have been taken with any release so far by Grey. Not to say this is any knock on his skills as a musician, but mainly down to the fact that his songs simply don’t sit well with what I like to listen to.

In some respects Nick comes across somewhat like a Bowie edged Nick Cave (which sounds as though it’s a recipe for greatness); however I am one of the few who doesn’t really care for David Bowies music and I am only slightly appreciative of Cave’s output (call me a heathen if you must), but we cannot all follow sheep-like towards what others tell us is consistently amazing – and actually isn’t.

Grey approaches his music is a twee fashion that is far too sickly sweet for me. Yes the guy can sing and his vocals have a warm resonating feel to them; but his overt poppy influences, bizarrely constructed into a bubble of squeaky-clean synth kitsch and romanticism, results in my fists itching from start to finish.