Gentle electronics mixed with airy synth and tripping light drum patterns, subtle vocal elements and a charming warmth make up the opening title track, giving way to something of a small soundtrack the way the vocal samples lightly infuse the music; this in turn leads to Poordream’s own remix of the track that takes an altogether more different dance approach as not to lead to monotony, following suit with yet another mix that is as different as it comes and is entirely commercial distancing itself from the original entirely.

The only downside to this is, as much as the further six mixes are of the highest standard by other artists, is this just wears the original a bit dry and I can’t quite think of any time I will venture to play these again and will most likely just stick to the original; a slight case of overkill comes to mind.

Ending number ‘Sounds of Consciousness’ is a building ambient number with many a peculiarity, namely from the use of vocal vocoding and is interesting in its own right apart from where it just falls apart toward the end, which was ever so slightly disappointing.

This is a difficult EP to score, I feel we needed at least one more original track; where I think Poordream may excel is on a full length release and I am genuinely intrigued as to where this may lead us, because this has only given us a brief albeit mixed impression of what he may be able to achieve.

This is the second in the series of Mutant Dub Step releases from the Greek label Spectraliquid label, the first being that from ‘Ebola’.

Again you know you are not in for the lengthiest of releases being that these are EP’s so you know its going to take a lot to make an impact; Essential to be honest.

For a start this has more in touch with what I would agree as termed as ‘Dub-Step’ than the previous EP and that is welcome.

‘Toothsmasher’ kicks thinks off on its merry way with lost of happy electronics, which throw you off the path before the sub bass kicks its way through.  It’s effective and practically everything you could wish for if this style of music is what you are after.  ‘Collapsible Shelter’ is truly where this boot off in fine form, beautifully layered and attention given to subtle ambiences filtering through the spasmolitic beats and off kilter blips and electronica, giving a warm homely feel to the very evident club sound system.

This is pretty essential listening if you are in to any form of dub, home grown house music and maybe even the more alternative forms of trip-hop out there.  Finished off with decent mixes from ‘Innasekt’ and ‘Pacheko’ again this only fails in the fact that it’s a rather short release; Fun though none-the-less.

I have never been a massive fan of the previous works of Ebola but was intrigued to see if there were any evident changes with his camp style wise since the last outing that I heard.

Much to my surprise this is something I can wholeheartedly say I appreciate and enjoy.

Opening with ‘Painkillers’ MDSV1 draws on a variety of influences and the first that came to mind is the rich sub driven warping bass sounds that I feast on from the likes of the amazing ‘Scorn’.  This is straight down that territory and holds up well against Mick Harris and co.

Mutant Dub Step definitely does what it says on the tin so to speak, with ‘Teledildonics’ reinforcing the opening track with a vengeance, it cuts, it slides, it toys with you and if this was released on vinyl it would be a club dj’s mixing dream come true.

To round off the EP we have two mixes from scene favourites ‘Enduser’ and aural lunatic ‘Shitmat’ respectively.  As you can imagine, these are rip-roaring versions of the original and do the both justice as only they could.

Perfectly packaged (as are all Spectraliquid releases)  I would recommend this to all first time listeners of Ebola, even if it’s a little short;  and I eagerly await the next full length release with anticipation.

This up and coming label certainly do have some surprises in store if this debut release from Blackfilm is anything to go by.  Beautifully packaged in a simple unobtrusive digipak with stunning artwork certainly whetted my appetite and there was more on store when I hit ‘play’, half expecting the usual IDM affair. I was in for a shock;  Blackfilm is a gloriously organic journey with a different slant on the emotional pulling of heart strings.  Let me explain.

This is not a wistful longing affair, it’s almost sinister in its approach, almost as if the emotions driven within this are sickly and unhealthy, riding with an almost murderous edge.  It’s definitely a dark affair that has the style and class of film noir, with deep resonating jazz edges, dripping with the decadence of times past.

Blackfilm encapsulates everything that should come form a new artist;  Toying the listener with a mass of modern day orchestral composition, driven with the blackest of background ambience that flitters between walking through barren cold landscapes and the warmth that greets you when you finally reach your destination.

With a pitch black heart and an outright flair for originality there isn’t much on this album that steps out of place.  It’s as raw as it is masterfully smooth, and glides between the two with great effect;  strangely enough, counter musical at times such is its obscurity.

A fantastic debut album; I am keeping my eye on this one. 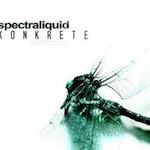 This is a nifty compilation from brand new Greek label Spectraliquid. It makes a refreshing change to have the majority of an album comprising of basic unknowns and still be of top notch quality standard. Spectraliquid pretty much have stamped where they are at from the off.  Deep resonating industrial sound-scapes that ping-pong from all out industrial to the fringe of IDM circles.  It’s an effective compelling mix that whilst we have all heard before, already displays a deep rooted grasp of what is actually worth a listen, never wandering off into anything catastrophic or aurally defective.

There is a line of course between the unknowns and the masters at their game.  The best tracks on the album predictably coming from the ever reliable and pleasing ‘Detritus’ and ‘Ah-Cama Sotz’. This is followed closely by a nice surprise in the guise of ‘Throttler & Track Killer’ who utilise the harsher edge of cinematic industrial that smashes into a wall of thumping breaks and is effective as a lump hammer.  Class.

All in all for a first release this lot really got their heads together, and it shows.  It reeks of quality and a good grasp of what is relevant, packaged simply and beautifully and I really hope they do not stray from this aesthetic.

Konkrete is produced in limited numbers, buy now or regret it later.