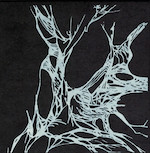 Effectively this is a reissue of two EP’s first released in 2005, repackaged and brought together as a compilation album; which seems to be a standard thing to do nowadays when the initial releases were in a limited format.

For those that have not heard these previous affairs, this collection draws on ranging drones, tribal percussion and rich deep and gritty ambient that pulls on every corner of the listener’s psyche. There is of course a tendency to play on the obvious now and again, with the occasional chanting monk vocal; but given when these were initially released it can be forgiven.  Nowadays, many an act would steer away from this medium as time brings a progression in sound; but it does give an old school feel to the proceedings nonetheless.

A raw approach to textures give an abrasive edge to the overall production and this in turn brings a distinct visceral scratch to the senses; and there is a distant impression of agony and despair that permeates these two releases when they are taken on board as a whole collective.

Overall, this is worth any lover of Dark Ambient and ritualism giving it some ear time, as this will take them back to a simpler stage in the evolution of the genre, even if Aeoga were out of step somewhat, way back then.