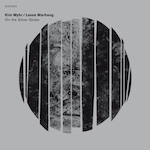 Myhr and Marhaug are both well-respected artists in their own right.  This debut originated as a commission from the MetaMorf Art Bienale in Trondheim for them to collaborate on an 8-channel piece for 2016.

Set as a science-fiction story on a distant planet, the concept works well with the music itself coming across as sound waves picked up from a distant galaxy.  Squelching radio frequencies scatter themselves over a rumbling, steady bed of bleak Dark Ambient, as machines grind alongside high fluttering beeps.  The end result is minimal and well thought out for the most part.

It’s not all perfect. Sometimes the tracks themselves, took too long to get going; and this in turn left a tendency to become disengaged, only to be dragged back in when there was an immediate abrupt shift in sound.

As a whole though, this is a steady and solid piece of work, even if it will only appeal to a relatively small market.