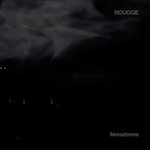 France’s Rougge is an unkown to me before today. With this, his second album broken down into ‘fragments’, there is an accompanying press sheet boasting a voice reminiscent of Radiohead’s Thom Yorke and Antony and the Johnsons.   They couldn’t have got it more spot on, but I would veer towards the latter.

As an album, this is best played in one sitting, as the songs seamlessly flow one into the other. The credible piano work is a dark, involving and expression-laden backdrop to the haunting voice of Rougge; gracefully soaring through the veiled tones and is wonderfully sung throughout, where words becoming notes and expression.

In a world where everyone is trying to be the next best thing, or fiddling around with electronics and gadgetry, it’s nice once in awhile to hear the simplicity of one man with a piano. Its gratifying when it’s played well and genuine talent shows through end-to-end and Rougge has it by the bucket load.

With an album such as this, I surprisingly found it difficult to review as its so on point, with its bare bones simplistic format of one man and an instrument. Whilst the songs themselves differ little from start to finish, they don’t need to. This is an excellent album, performed by a brilliant musician. Simple.