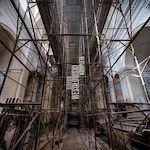 Polish composer Wesolowski and six of his compatriots, have here, formulated a beautifully produced album, where electronics meet an array violin and cello. Musically speaking they’re on point, with an emotive orchestration that tugs at the heartstrings. That is of course until everything goes cataclysmically wrong.

Wesolowski himself brutalises the ears with pitiful display of tone-deaf vocals. Luckily he has his colleague Maja to provide her dulcet tones; but she can do little to blot out Stefan’s wailing and moaning; and in essence she should have sat him down and advised him to keep his trap firmly shut.

I am not knocking the compositional skills of Wesolowski, not one jot. But to be fair, it is his friends who are doing the work, yet he is the one taking all the credit; and when you have one job (to sing), you better make sure you’re capable of doing so.

‘Kompleta’ is a frustrating album because of its key pitfall. Moving forward, Stefan should stop taking all the acclaim, tape his mouth up, and orchestrate his band, whilst giving them some acclaim and give the project a collective name, rather than his own.