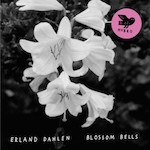 This is Dahlen’s second album, which follows on from his debut, ‘Rolling Bomber’. Opening up with ‘Snake’, we have a varying degree of backwards electronics and light percussion, which is pleasant enough in its approach.

Tempo is increased on ‘Pipe’ that draws on Space Rock aesthetics, with a spangle-ridden mash up of rhythms and instrumentation; not entirely my bag, but well constructed none-the-less. ‘Knife’, ‘Iron’, ‘Hammer’ and the title track come off best, with a varying degree of ambient and Krautrock splashes of sound. The latter holding a mysterious aura and is by far the best track on the album.

There isn’t anything on this release that is bad; in fact it’s constructed and performed professionally to a tee. There is an impressive array of instrumentation used on ‘Blossom Bells’ and not once do you feel that Erland is biting off more than he can chew. Musically as stated before though, this is not for me; but I do appreciate just how well this has been pieced together.