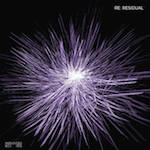 Tagged as a Various Artists release, this download album is actually a collection of re-works and re-mixes of the collaboration between Peter Knight and Dung Nguyen’s RESIDUAL project that was originally released in 2010. In fairness I haven’t heard the original project, neither any work by the artists involved in this revival of sorts, so it is hard to engage exactly what the contributors have brought to the table.

‘Autumn Music’ comes across all Deep Forest in the hands of artist Lena. Tribal beats thud through the haze and set the scene perfectly for the guitar ambient of Phase Pedal by Tilman Robinson. Along with the misty glade sounds of Joe Talla, it’s fairly evident as to the overall approach of this release.

At the hands of spoken word artist Black Sifichi, the scene does change somewhat to the more peculiar and dark, but this is a brief respite even with the ever so slightly inky tones and subtle dance infusions of Dan West.

Masonik carry out the final throes of this compilation; and end the album in much the same way it started out.   Not a bad listen in total, nor is it badly composed, but not one I will go back to; nor will it make me seek out the original source, as none of this really floated my boat.