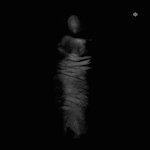 Phillips has had his finger in many pies since the mid 80’s, with Fear of God and also an abundance of his solo work. Composed between 2009 and 2011 the work on this album first appeared on limited edition cassettes and these have been remastered for this double disc release.

As experimental as I envisaged, opener ‘The Less I Know’ is a rabid pit of noises and black ambience that is as bleak as they come, torn apart by demonic voices and whisperings. Things don’t let up come ‘Humananimal B’, where a monolithic wall of Dark Ambient, culminating in the murky ‘Humananimal A’ sounding positively cheerful.

There is an overt Power Electronics edge to Phillips’ work and I appreciated the background soaring and whines of ‘Rape Culture’. I have heard a lot better over the years, but Dave does utilise his knowledge of sonic architecture to good effect, where everything feels full and rounded; which is imperative to releases of this nature.

Things don’t let up come disc two of this lengthy slab of guttural savagery. Once again an array of bestial noises reek havoc amongst a crushing pit of sub-level sound; and the outcome is akin to the soundtrack to the end of the world.

The only downside to this release is that there is very little variation overall. However, this leads to a solid continuity, if you have the patience to see this devilish collection of nightmares right through to its grisly conclusion.