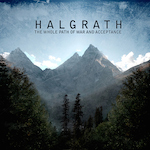 Cryo Chamber, a relative newcomer of a label is coming along in waves with an abundance of quality, impressive Dark Ambient releases; and with the backing of Tesco Distribution, fills some of the void left by the demise of Cold Meat Industry.

Halgarth are once again, one of those acts that have all the tools to hang around in the upper echelons of the genre. As ‘Acceptance of the Inner Self’ paces itself, the ranging pads ascend graciously and unobtrusively, whilst tympani beats slowly pick up the march, before slowly falling off the edge into the deepest of voids.

‘The Whole Path of War and Acceptance’ comprises of eight tracks that fill all corners of a room with no space to escape. Enveloped in inky rich bass frequencies that intertwine, Halgarth holds the listener on a tight leash that is given slack sporadically to appreciate the odd blast of cold air, provided by frosty pads at given moments in time.

There are momentary nods at brilliance along the way with classical ghost female vocals, as on the wonderful ‘Afflatus’; placing Halgarth on a pedestal right up there with their peers and crossing the bridge between straight up DA and the arcane.

Altogether an impressive release, this album amongst others markets Cryo Chamber as one of those labels that are ones to watch with a keen and eager eye.