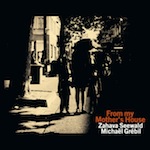 Opening up with a set of field recordings isn’t the ideal way to grab my attention, unless of course it’s going to lead to something spectacular.  For the first two tracks, this was the staple output and it set things off in a bad light.

However, things are turned on their head come track three, ‘Kristall’.  Female vocals, part sung, part spoken, harmoniously counteract each other over a light ambient drone and is such an oddity that it’s hard not to become engrossed in the story they’re telling (even if I couldn’t understand every word they were saying).

‘From My Mother’s House’ doesn’t contain that many actual songs if truth-be-told.  These are scattered throughout the album with clusters of mini tracks created with various natural ambient manipulations in-between.  It’s effective in its own way, proving a plethora of audio infused visuals reminiscent to the direct opposite of a silent foreign movie, where the footage has been replaced with sound alone.

There is a complexity to this release that shouldn’t be taken at face value; it would be all too easy to cast this aside and ask just what the hell is going on.  Given some time to bed in, this is altogether an interesting album, occasionally letting its hair down and providing some glorious vocal talents to make their way to front of house.