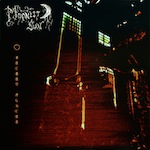 I have to hand it to Jason Mauricio; if you are not going to get a big deal, then release it yourself.  Effort has been made to create his own digipak’s for these releases and two thumbs up for that too, albeit in very limited quantities if you don’t like digital downloads (I hate them).

With the first of these two releases ‘Secret Places’, initial output relies on some solid Dark Ambient; nothing utterly amazing, but all the same, providing a cold elusive corner to hide in.  Things steadily get noisier as you journey onward with natural field recordings being roped into the mix providing a more of a natural Industrial slant to the proceedings.

Attention has been paid into letting the tracks naturally slide together to become a cohesive whole.  Songs follow a similar pattern of starting out on the lower end of the spectrum, to eventually collide into a more ritualistic clatter of machines and there is something remarkably old school with the way Mauricio goes about his work.

‘Shadows of Decay’ is a different beast altogether.  Coming from an evidently more analogue slant than his earlier works, this is altogether more engaging, with distorted vocals and falling machinery crashing together as a surging mass of tormented psychosis.

I have reviewed these two albums as one for a reason; each balances out the other, and looking at MS’ rate of output they could have been released as one.  Singularly, each lack the necessary impetus to make them classics in their own right.  Taking the quieter moments of ‘Secret Places’ and the noisier brutality of ‘Shadows…’ cutting the lesser tracks out of the mix (of which both have aplenty) would provide one solid slab of early 80’s underground DIY home-grown Industrial.